From Mark Tommerdahl, owner of corticalmetrics and inventor of the Brain Gauge; I have a financial interest in the sale of PEMF and Brain Gauge devices, so please take that potential bias into account when considering my statements

Pain – does anyone know how to treat it?
Or maybe a better question is – DID anyone ever successfully treat it…

One of the unique things about the somatosensory system that separates it from the other sensory modalities is that there are pain receptors in the skin and that they project to the somatosensory cortex. All painful stimuli that we encounter in the environment is modulated through the sense of touch. This observation has been well known for decades, if not centuries, and this concept did not escape medical practitioners. A logical progression of the localization of the part of the brain that handled all somatosensory processing to the idea that removing that part of the brain would remove pain surfaced in the mid 1900s. Intractable pain – the type of intense pain that never goes away – is difficult to treat and the patient is typically left with only pharmacological options, which are not always a good solution. The opiate crisis is well documented: three times the amount of opioids were prescribed in 2015 as there were in 1999 and the number of deaths from opioid overdose has risen exponentially.

So how was pain dealt with surgically in the mid-1900s?
Basically, the procedure consisted of opening the scull, re-creating the pain by touching the area of somatosensory cortex that was responsible for the pain, and then ablating or removing that section of cortex. This method started to be routinely performed by neurosurgeons in the 1950s until 1969 and there was significant evidence that this procedure did, in fact, reduce pain of patients. In many cases, patients were completely relieved of pain and in many others, the patients could get by with taking aspirin rather than opiates. It appeared that these neurosurgeons were onto something. It was also evident that the entire area of somatosensory cortex did not have to be removed, and this practice was getting more refined with each iteration of the procedure.

So what happened? Why did this not become standard practice?
The technique came to a screeching halt when a couple of “prominent” neurosurgeons of the day published a report in 1969 that the method did not work. In actuality, it didn’t work for them because of bad scientific practice and a very sloppy study on their part. Since they were well established, their paper – which, besides incorrectly stating that the method did not work – suggested that neurosurgeons perform frontal lobotomies to reduce pain. For the uninformed, that’s not a great solution, and happily, it was not adopted universally as a sound practice. Obviously the lobotomy would reduce patient complaints about pain, but it comes at a great price. Moral of the story is that just because someone with a big voice speaks does not mean that you should listen. What you should do is evaluate the data and determine what it teaches you.

The surgical studies that demonstrated success in pain reduction actually complemented some post WWI and WWII studies of lesions of different parts of the somatosensory cortex (the lesions were caused by bullet wounds) that led to some individuals not having pain. The area of the brain that appeared responsible for loss of pain in the soldiers corresponded to the area of the brain that the successful neurosurgeons had been removing. The region that was identified as being sensitive to pain is called somatosensory cortical area 3a, and recent studies have further refined the area that is pain promoting as a subregion of 3a (anterior portion; labelled 3c in the figure below). 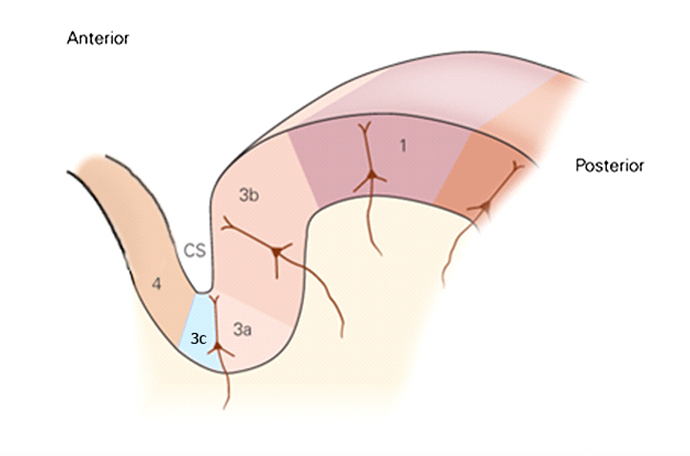 Screen Shot 2019-04-13 at 1.41.05 PM.jpg1776×1174 262 KB
In this figure, there are several labels of different cortical areas. Area 4 is motor cortex, area 3a/3c is in somatosensory cortex (area 3c is where the C fibers project to; C fibers are the non-myelinated nerves that are activated in the skin), area 3b/1 is the part of somatosensory cortex that interprets mechanical inputs (such as the discriminative tasks delivered by the Brain Gauge). Ablating the area 3c results in a reduction or elimination of pain.

How helpful is this information if you are not going to ablate the area surgically?
First, this could be the target area for reducing pain with a number of methods – there are numerous research efforts targeting delivery of signals to the brain. These efforts include the use of TMS, PEMF, ultrasound and tDCS to modulate brain signals at specific locations. Currently, none of these methods have the resolution to isolate the target area.

However, it turns out that all of these cortical areas are highly interconnected. Here’s an oversimplified summary of some of those connections: 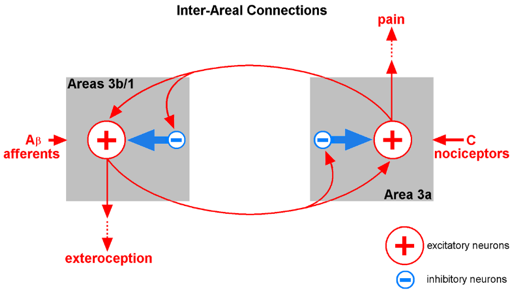 The different inputs – the mechanical and pain receptors project to different areas, and the activity generated by these different areas projects to competitively inhibit the opposite area. In other words, pain suppresses the response to mechanical stimuli and mechanical stimuli suppress the response to pain stimuli. Ever touch something really hot? You probably recall that the way you make it feel better is to rub it. In other words, mechanical input to areas 3b/1 work to suppress the activity of area 3a (sorry, it’s an old figure and area 3c was not defined when the figure was generated and I am too lazy to rework it).

The figure below emphasizes highlights the areas that we regard as pain promoting (red – if this area is active, then it is likely that pain is experienced) and pain suppressing (activate these areas and their activity will work to suppress the activity in the pain promoting region).

Note that the pain suppressing areas include both motor and sensory cortex, so that movement as well as stimulation will promote suppression of pain. 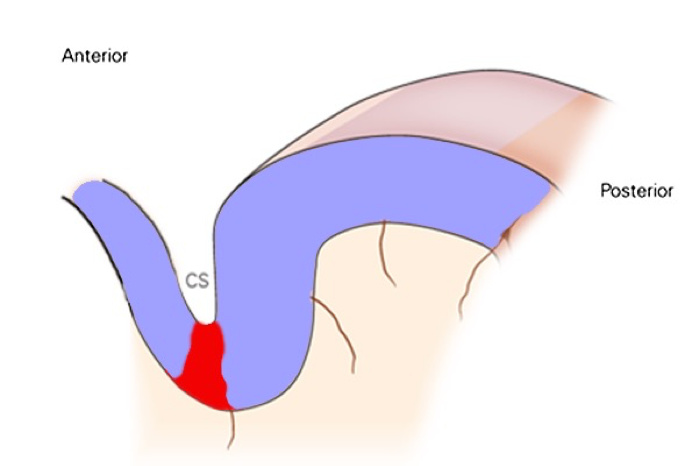 The above description is a bit oversimplified, but the takeaway message is that there is an area in the brain where pain receptors in the skin project to, this area plays a prominent role in pain perception (remove it and pain is reduced or eliminated), and activity in the cortical areas surrounding this pain promoting region will try to suppress activity in the pain promoting region. The next logical assumption that you might have already jumped to is that pain could be diminished with tactile stimulation, which is true except that some types of tactile stimulation are better suited for reducing pain than others. Data on that is discussed in an article here.

If acute pain persists for a significant duration, it becomes chronic and the activity in the pain promoting region can become hyper-active and difficult to suppress by the pain suppressing regions (a future post will describe acute vs. chronic pain differences in more detail). This is when some type of intervention is needed at the central level (i.e., the brain – not just the nerves that are projecting from where pain is perceived to be). The pain promoting region is difficult to target because it is buried deep in the central sulcus (CS in the picture above), but this is the region that researchers need to aim their interventions at – apparently the same region that neurosurgeons were ablating in the mid-1900s.

What happens when pain suppressing regions become significantly reduced in terms of activity? This is the case with amputations – there is less input to the pain suppressing regions and the pain promoting region is left unchecked, and we think this is one of the major contributions to phantom limb pain. That topic, and other topics in pain research, will be discussed in more detail later, as we have a number of ongoing studies in both acute and chronic pain.

I was watching videos on Brain Plasticity and was watching an experiment with a patient with phantom limb pain. The researcher put his hand on the table where the man’s hand should be and touched his own hand and the man could feel the taps as if it was his own hand.

The brain is pretty fascinating.

@Mark Does this mean that it could be a good idea to place the coils, side by side (or stacked), over the area of the primary somatosensory cortex related to the specific pain being felt?

For example, my wife has strong CRPS pain on her feet that deosn’t seem to react to coils placed on her feet.

In this case, do you think it could be a good idea to place the stacked coils right at the center of the crown of her head instead of in the feet? 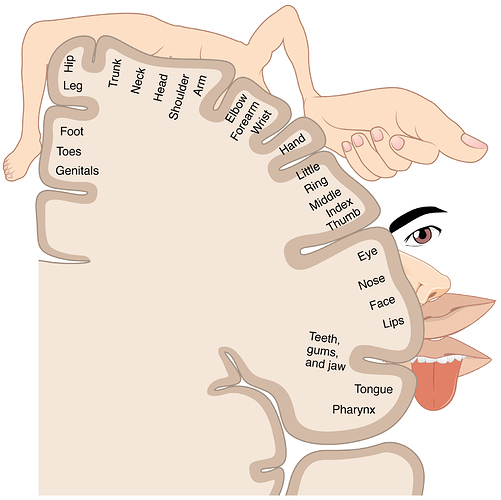 To answer your question about treating pain by putting coils over somatosensory cortex - maybe. Area 3a is buried at the bottom of a sulcus, and it might depend on whether or not your coils are effective at that depth. This is an active area of research in which lesions (in animal studies) are used to target that area and in human studies, I have talked to people who are targeting the somatosensory cortex with TMS or ultrasound (have not seen anything published, just have had some conversations with other researchers). Hypothetically, we think this is a good target area for pain. It’s just a matter of determining the best way to reach it.

I was reading the article and it was talking about tapping the pad of muscles below your thumb with something 48 degrees C, meaning hot, combined with a certain frequency vibration and either a ring to inhibit the vibration or no ring so the vibration doesn’t get inhibited, am I understanding that properly? Low frequencies and high frequencies do different things and it was the high frequency, which affected the perception of pain.

(What did the low frequency do, I wonder)

I also am trying to understand the whole thumb thing. Is that the area of the body, which relates to the part in the middle of the brain, which is harder to reach?

Have you tried to reach it?

I just ordered a C-5 with double stacked coils, plus have my M-1.

I may have brain problems and may not understand science, but you gave me a goal.

Did they vibrate the brain or the thumb?

Laughing. You both are so much smarter than I am and I never really took science and have to take your big words and translate them down to their essence.

But maybe I will be able to tell you if I figure out how to stop my friend’s pain faster aiming it there or at her back and knees.

I have to aim it at my own head first to see what it is like. So far, all of it has been good, but deep coils may affect something, who knows?

Can I do it from the top of the head down?

I am not going to be experimenting on anybody else’s brain, except for mine.

But I am going to experiment on my brain.

You don’t actually have to take time out of your busy schedule to answer me, but you did say that you would write about chronic versus acute pain and that would be nice.

I have to pre-tell you that I already know that I have such serious brain problems that I end up annoying people and I think things are funny and miss that other people don’t. It has happened a few times. It has been better lately, but I mentally have to coach myself and say to myself, he is doing a very professional process on these pages and you are not. I get scared about it sometimes and it is because I know that even though my brain has improved considerably, it is still broken enough that I miss the “clues” that people give and I never was subtle but people are subtle and I miss it and alienate people. It sucks to have brain problems. I have been handling all of it pretty well, except for that.